Compared to dogs, cats are more stubborn and harder to train. They are indeed very smart, but they are also independent creatures who listen to no one but themselves. That’s why a lot of owners struggle in finding how to discipline their cat. While dogs may show that they’re feeling guilty when they did a bad thing, cats mostly seem not to care. You can reprimand a cat all you want, and he would still show undesired behaviors. Sometimes the consequences are trivial, but sometimes cats can cause bigger problems if not disciplined properly.

So what is the best way to discipline a cat? Let’s check it out with this blog post from Hyperfavor!

Cats vs. Dogs: Why Are Cats So Hard To Discipline?

To give you a more thorough perspective of a cat’s mind, here are a few reasons why cats are harder to train compared to dogs. These will help you understand more about cat behavior, so you know how to motivate them to do what you want:

Cats are only recently domesticated

Dogs have been with us for roughly 30,000 years, while it’s only around 10,000 years ago that cats were introduced to households. However, the numbers aren’t the only factors that affect how these creatures behave around humans. The fact that they were also bred differently also has a great influence on behavioral traits they show now.

Since the time of domestication, dogs have been bred to serve and please us. They were trained to read our expressions and gestures, and got more familiar with voice commands. Therefore, dogs usually know when they’re being praised, and when they’re being disciplined. On the other hand, cats were not deliberately domesticated like we imagined. They more likely formed a mutually beneficial relationship with humans instead. We provided them with shelter and food, while they chased out rodents and pests.

For the recent hundreds of years, they were only bred for appearance as prized house pets. Thus, cats don’t portray as many desirable behaviors as dogs do.

It’s harder to communicate with cats because their instincts also act differently compared to dogs.

For dogs, following orders and discipline are already in their blood. In order to be accepted as a member of a pack, they need to get along with others and do what the alpha told them. Sociability is needed for them to maintain their place in the pack hierarchy.

Together with breeders trying to increase these desirable traits, dogs know how to efficiently communicate with humans. They learn to perceive us as the leader, and treat our family members as their pack. Cats, by nature, are independent creatures and prefer to work alone. They don’t usually go in a pack or have another leader other than themselves. Therefore, they aren’t familiar with commands and don’t look to us for instructions like dogs do. Their understanding of what we want is way more limited.

When it comes to training, the most effective method for most owners would be a reward system. That means if your pet is highly food motivated, then they’ll be more likely to do things as you say in exchange for food.

Dogs are quite easy to train for the same reason – they know that if they display a certain action, then they would get a reward in return. Even if there is no food involved, dogs will automatically assume that “something good will happen”. This motivation makes it very easy for us to signal dogs that their behavior is acceptable or not.

However, a cat would not simply do anything you want. They feel no need for the “good thing” that might happen in the future, and sometimes even food and toys won’t do the trick. And finally, cats aren’t as smart as dogs

This doesn’t mean that your cat is dense. Cats have very high intelligence, it’s just that it certainly can’t be compared to a dog’s. Therefore, don’t expect that your cat can be disciplined and trained the same way with a dog. They need more time and a different approach, so that your idea of a good behavior can properly get to them.

How To Discipline A Cat: Discourage Bad Behaviors Correctly

Before we get into more detailed ways to discipline cats, there are a few things you first need to remember.

Never use physical punishments that hurt your cat intentionally. This might only create counter effects such as making your cat even more aggressive or overly anxious. Extreme physical discipline can make you lose the hard-earned trust and bond with your cat.

Be patient and don’t compare your cat to your dog. As we’ve mentioned, the ways these two creatures communicate with us and respond to our commands are completely different. You need an approach that’s more suitable for cats than what you’re used to when training your dog. Don’t shout or yell at your cat. Cats don’t understand human’s language anyway, so trying to raise your voice to reprimand them is just useless. They may make the connection that a louder tone of voice means something negative. But most of the time, it would just make the sensitive cat more stressed and anxious.

Finally, if your cat shows any behavior that’s more concerning that usual, we suggest that you visit a vet. Sometimes their bad habits might be a result of physical and mental illness. Checking with a professional is the best way to fix any undesirable act.

How To Discipline A Cat: Solutions To Specific Problems

Let’s look at a few bad cat behaviors and what they mean:

Meowing too much at night

Meowing is believed to be a mechanism that cats developed just to communicate with humans. Therefore, cats will learn that they might be able to control you with their meows. If you have a cat that demands attention and food all the time, the best way to discipline them is to ignore them completely. They will have to learn that meowing when you’re asleep won’t get them what they want. This method takes a bit of time and endurance at first, but it’ll work great in the long run.

Another method is that you can drain their energy prior to bedtime by playing with them. If catnips have a sleeping effect on your cat, give them a catnip toy, too.

Be positive that this is just a sign that your cat loves and cares for you. Embrace their meows with a fun cat print, like this “It’s feed me o’clock” canvas. Similar to dogs, there are cats who enjoy chewing on your possessions such as clothing or shoes. This behavior can be especially harmful if your cat starts chewing on dangerous items such as electrical cords or toxic plants. To stop them from chewing on anything, you can simply rub scents that they don’t enjoy on that item. For example, vinegar and citrus peels can naturally tell the cat to stay away. If this doesn’t work, try something that tastes undesirable like pepper sauce.

Another common bad behavior is the cad suddenly biting you aggressively. If your cat is usually gentle and well-mannered, it might be because they don’t know how to play with you properly. Naturally, cats bite each other as a form of play. However, a cat’s skin is thicker and more durable than ours. A bite harmless to other cats can make you bleed or suffer from infection. If your kitten didn’t grow up with littermates, he won’t know how hard is considered acceptable for a bite.

How to discipline a cat for biting? Simple. When you find that a bite is more than you can handle, let out a loud yelp. This way, your cat can tell that he is hurting you. This voicing method is used by other cats when they play as well.

Excessive tendency to be mouthy may also suggest that your cat is either stressed or have dental problems. Examine the cat to see if they show any sign of being unwell.

There are many reasons why a cat can be aggressive. Most of the time, you may notice that your cat may grab and attack your leg when you walk by. Or he will claw at you when you try to take an item near him. This is a sign that he’s bored and wants to play with you. Don’t punish a cat for attacking you. Instead, spend more time with your cat or give him interactive toys to keep him occupied. They will help your cat release the excess energy and become more calm.

In some cases, the cat may show aggression if he’s inducing physical pain or mental instability. If your feline has behavioral issues because of either reasons, consider getting treatment from your vet.

Not using the litter box correctly

Your cat is probably not used to using the litter box. Gradually introduce him to his new toilet and give reward when he uses it correctly.

If you’ve had the litter box for a long time and the problem still persists, check to see if the litterbox meets these requirements: One way to discipline a cat that poops on the floor or any unwanted area is to make that certain place less appealing. Use scents that the cat hates to clean the accidents and discourage them from going near the place.

We hope that you find this blog post on how to discipline a cat for bad behavior helpful to you. See you in other informative posts by Hyperfavor. 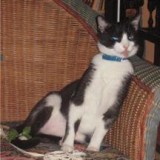 Thank you for commenting on my blog. But wait a minute—-cats are not AS SMART AS DOGS!!!! Uh, oh, them’s fightin’ words around MY house. But I hope you visit again. Loulou, Phd in cat behavior and proper ablutions, calm conduct and loving snuggles.